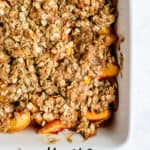 This post contains affiliate links for products I genuinely recommend, which means I earn a small commission at no cost to you.

This healthy peach crisp is the perfect way to enjoy late summer peaches! The bottom layer is full of jammy baked peaches drizzled with maple syrup, dusted with cinnamon, and covered in a thick blanket of naturally sweetened, buttery oat topping that resembles an oatmeal cookie.

Okay, could everyone who loves peaches more than Power Rangers and candy combined please stand?

I joke 🙂 A dear friend of mine, who is six years old, has on-point descriptions for most things, so naturally I'm going to borrow them from time to time. And since juicy, peak-season peaches are one of the BEST simple pleasures of summer, we definitely need to celebrate them with peach crisp.

Every bite of this healthy peach crisp is like a warm, cinnamon-y hug with fresh peaches that get perfectly jammy when baked. And OH MY the topping is pretty much an oatmeal cookie, which is slightly different than the more traditional crumbly crisp topping I use for healthy strawberry crisp... but just as delicious!

A food processor is an easy way to make the crisp topping, but if you don't have a food processor, you can use a pastry cutter or two forks instead! See alternative instructions below for how to make the topping with these tools.

How to Make It

To get started, you'll preheat your oven to 375 degrees and spray a 9x13" baking dish with nonstick spray (or grease with butter). Then, on to the peach crisp filling!

To make the filling, slice the peaches into thin slices and place them in a large bowl. Add cornstarch, vanilla extract, maple syrup, cinnamon, and a touch of lemon juice. Stir gently until the cornstarch is dissolved and the peaches slices are well-coated. Set aside while you make the topping.

To make the crisp topping, you can choose one of two methods, depending on the equipment you have: food processor (my fave) or a pastry cutter (or two forks). Both will work beautifully!

Food processor: In a food processor, combine the cold butter with the white whole wheat flour, maple syrup, cinnamon, and salt. Pulse until a pebbly but cookie-dough-like mixture forms. Next, add oats and pulse a couple times until they are just incorporated into the mixture. The final result's texture will resemble cookie dough.
Pastry cutter or two forks: Whisk flour, cinnamon, and salt together in a bowl. Place butter into a separate bowl. Pour flour mixture over butter and cut it into the butter using a pastry cutter or two forks, until a pebbly mixture forms. Add maple syrup and gently stir until a cohesive dough forms (no dry pockets of flour). Add oats and stir until evenly distributed throughout the mixture. If you need to get in there with your hands to really get it combined, go for it!

Once you have the filling and the topping ready, you can assemble the crisp. Transfer the peach crisp filling to the prepared 9x13" baking dish in an even layer, and then add the crisp topping evenly across the top. Since the topping has a cookie-dough-like texture, you may feel like you are dolloping more than dumping it over the top. This is okay! Just make sure it's spread evenly across.

Finally, bake at 375 for 30 minutes, or until peaches are bubbling up the sides.

All that's left to do is wait for it to cool for a few minutes, then serve it up with some vanilla ice cream, whipped cream, or my favorite: coconut whipped cream.

Success Tip: Fresh peaches are ripe when they become fragrant and have a slight give when you press on them. When peaches are firm with slight give (ripe) and not too mushy (overripe or bruised), it's much easier to get thin slices. Plus, they hold their shape nicely when baked!

If you know how to make the recipe fit a certain diet, let the reader know here. Don't fake it - only provide guidance on topics you have actual experience with.

Store peach crisp in an airtight container for up to two days at room temperature, or up to seven days in the refrigerator. It will get moldy if you leave it out on the counter for more than a couple days (unfortunately I learned this from experience!).

To freeze, place into an airtight container and freeze a fully baked peach crisp for up to three months. Thaw in the fridge and reheat in the oven at 350 degrees for 20 minutes. I love this container (affiliate link) because I can freeze without using plastic - yay sustainability!

This top tip is for the topping. To maintain the texture of the topping, make sure to keep the oats mostly whole, but evenly distributed throughout. If you're using a food processor, this means no need to over-process! Simply pulse a few times to yield a cohesive, evenly distributed mixture with mostly intact oats, which will bake into a nicely textured topping.

Can I use frozen or canned peaches?

Yes, you can... 😉 For frozen peaches, use the same amount of peaches required by the recipe, and no need to thaw them out first. For canned peaches, drain three 14-ounce cans of peaches packed in juice (not syrup), and use in step 2 (below) to create the filling.

Should I store peach crisp in the refrigerator?

Peach crisp can last one to two days at room temperature, covered tightly. After that, it can go bad sitting out, so I recommend storing it in the fridge covered tightly for up to seven days.

Can peach crisp be made ahead? 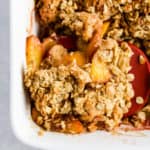 This healthy peach crisp is full of jammy fresh peaches baked in cinnamon beneath a crisp topping that resembles an oatmeal cookie! It's a simple, delicious way to enjoy the best fresh peaches of the year.

This website uses cookies to improve your experience while you navigate through the website. Out of these cookies, the cookies that are categorized as necessary are stored on your browser as they are essential for the working of basic functionalities of the website. We also use third-party cookies that help us analyze and understand how you use this website. These cookies will be stored in your browser only with your consent. You also have the option to opt-out of these cookies. But opting out of some of these cookies may have an effect on your browsing experience.
Necessary Always Enabled
Necessary cookies are absolutely essential for the website to function properly. This category only includes cookies that ensures basic functionalities and security features of the website. These cookies do not store any personal information.
Non-necessary
Any cookies that may not be particularly necessary for the website to function and is used specifically to collect user personal data via analytics, ads, other embedded contents are termed as non-necessary cookies. It is mandatory to procure user consent prior to running these cookies on your website.
SAVE & ACCEPT
26 shares