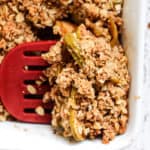 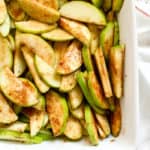 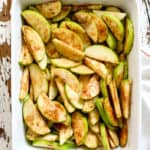 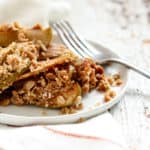 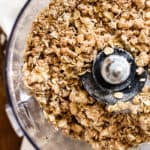 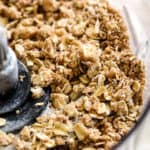 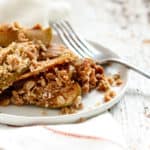 A twist on classic apple crisp, this almond butter apple crisp is a healthy-ish, real food dessert recipe with plenty of cinnamon. Almond butter, oats, and spelt flour give that topping some extra texture and heartiness. Your house will smell amazing!

Okay, so you know that kid that always picked the topping off the apple crisp? Well, I'm not going to say I *wasn't* that kid, but I am going to ask if we can we be a little sympathetic towards her? Because what's a seven-year-old to do with, essentially, a deconstructed cookie on top of some cinnamon-y, brown sugary apples, next to some creamy, somewhat melty vanilla ice cream?

Now hold onto that sympathy, and let me ask you: what about the adult that picked the topping off the almond butter apple crisp? That's allowed, right? I think you'll understand after you make this twist on the classic apple crisp with a little almond butter and maple syrup in the topping. P.S. I eat the apples too in my adult life, I promise.

(Seriously, though. Tell me you don't want to get into that apple crisp topping. ^^)

So, a thing about me: I love, LOVE apple crisp and apple pie. I mean, they really fall into the same category in my book, the only difference being whether I have to try and make a pie crust or not. In any case, apple crisps and pies were my birthday dessert of choice growing up, and are, hands down, my favorite dessert to this day... unless you put a cherry pie in front of me ;).

And, now that it's fall, we need tons and tons of apple crisp, don't we?? I vote yes.

It's so much easier than pie. First, preheat your ovens to 350 degrees and spray a 9x13-inch baking pan with nonstick spray.

Make sure all of your apples are sliced -- about five or six cups' worth. It's totally up to you whether or not you peel them. My mom always did, but I can't peel an apple without completely destroying it (like, there really isn't an apple left when I'm through with it), plus I don't mind the peelings on at all when the apples are in the actual dessert. Whatever you choose, just make sure all those apple slices end up in a big bowl so we can douse them in the good stuff.

In a smaller bowl, you'll whisk together some corn starch, apple pie spice, lemon juice, and a bit of brown sugar. If you don't have apple pie spice on hand you can make your own or just use some cinnamon. Both ways will be delicious and make your house smell like fall.

Pour that mixture over the apples in their bowl and toss a bit to coat. Then, put 'em in a pan like so:

Now for the BEST part: the topping. While I love traditional apple crisp topping, adding almond butter and maple syrup was an excellent decision, if I do say so myself 😉

Making the topping in food processor is probably the easiest way, especially when dealing with cold butter, but you can also use a mixing bowl and a pastry cutter or two forks. If using a food processor, you'll just combine a stick of butter, some oats, spelt flour, almond butter, maple syrup, apple pie spice (or cinnamon), and salt. Pulse the mixture until it's crumbly, like this:

Then try not to eat most of it before you layer over the apples.

Then try again not to eat most of the topping before you bake it all in the oven for about 45 minutes.

But once you take it out and cut yourself a massive piece like so^, that topping is all yours so don't hold back.

Oh, I almost forgot to tell you my favorite thing about the topping (besides the fact that there's almond butter). It's super hearty and nutrient dense while still tasting buttery and sweet, like it's supposed to. Mostly because there is a whole stick of butter in there. But seriously, oats, spelt flour, and butter have got your back.

So make yourself some almond butter apple crisp this week!

P.S. Apple crisp is of course best served a la mode or with a little whipped cream. I was out of both when I made photographed this, so you can bet I made an emergency trip to the store within 24 hours.

P.P.S. While you have those apple slices out, sauté a few in cinnamon and maple syrup for some Apple Pie Yogurt Parfaits throughout the week.

A twist on classic apple crisp, this almond butter apple crisp is a healthy-ish, real food dessert recipe with PLENTY of cinnamon, that'll make your house smell amazing. Almond butter, oats, and spelt flour give that topping some extra texture and heartiness.

This website uses cookies to improve your experience while you navigate through the website. Out of these cookies, the cookies that are categorized as necessary are stored on your browser as they are essential for the working of basic functionalities of the website. We also use third-party cookies that help us analyze and understand how you use this website. These cookies will be stored in your browser only with your consent. You also have the option to opt-out of these cookies. But opting out of some of these cookies may have an effect on your browsing experience.
Necessary Always Enabled
Necessary cookies are absolutely essential for the website to function properly. This category only includes cookies that ensures basic functionalities and security features of the website. These cookies do not store any personal information.
Non-necessary
Any cookies that may not be particularly necessary for the website to function and is used specifically to collect user personal data via analytics, ads, other embedded contents are termed as non-necessary cookies. It is mandatory to procure user consent prior to running these cookies on your website.
SAVE & ACCEPT
33 shares