This late summer veggie pasta salad is made with late summer produce favorites (sweet corn, zucchini, and red peppers) and goat cheese! Then, you'll simply toss all ingredients together in some olive oil, lemon, and garlic. It's a simple side dish for late summer cookouts, or healthy make-ahead lunches for back-to-school.

September! You guys, I ADORE September produce... and everything about September. It's a month that makes me want to: 1) Deep clean my entire apartment and get rid of everything I don't need, and 2) reread the Harry Potter series, and 3) go to farmers market and buy all the late summer produce.

Number one is pretty self-explanatory. I feel like no matter how long ago I graduated from school, September still feels like a beginning, and it makes me want to start fresh. So, throughout August I pushed myself to figure out my small living space issues (i.e. got creative with storage) and got rid of some stuff, so that everything could be organized. It helped clear my head space a lot, too.

Number two? Totally a cultural thing, but something about fall makes me want to cozy up with any Harry Potter book, no matter how many times I've read them.

NUMBER THREE. September farmers markets are my favorite. Lazy-ish September Saturday mornings, cool but sunny, coffee in hand. If every Saturday could start like that year-round, I honestly don't think I'd get sick of it.

That is, in part, because this transition time into fall is somewhat special from a produce perspective, don't you think? Being both a beginning and an end, we get to see the first butternut squashes and apples while we're still up to our ears in tomatoes, cucumbers, peppers, beets, kale (way too much kale, though...), corn, beans, zucchini... the list goes on. Which brings me to what we're really here to talk about:

Lately I've been wanting to hang on to that late summer produce with this little number. It's:

And it needs to be in my mouth, like, right now.

AND. And and and. It's SUPER high in protein because it's made with chickpea pasta (I specifically used Banza pasta this time around, but I love trying different kinds). And yup, we're talking the protein big leagues here, as in 25 grams in a 3.5-oz. serving. 25 grams, people.

Not only that, but the texture and flavor is hardly different than a flour-based pasta, which I can honestly say is impressive because trust me, I tried a black bean pasta once that was super mushy and overall strange.

All my excitement aside, don't feel like you have to go out and buy a special pasta -- whole wheat pasta is totally fair game here, with equally delicious and nutritious results. It just so happens that I tried some pasta made from chickpeas... and now I'm kind of obsessed with it. But seriously, just use whatever is in your pantry 🙂

So, here's what's going on with this late summer veggie pasta salad situation.

Basically, you're just roasting some late summer veggies (I used red peppers, zucchini, and corn). While those are roasting, you get everything else ready:

Toss that all together in a big bowl and throw in some goat cheese and freshly cracked pepper on top for good measure.

For Other Late Summer Produce Recipes...

Roast some red peppers to use in recipes throughout the week, or try some of my favorites!! 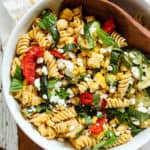 This website uses cookies to improve your experience while you navigate through the website. Out of these cookies, the cookies that are categorized as necessary are stored on your browser as they are essential for the working of basic functionalities of the website. We also use third-party cookies that help us analyze and understand how you use this website. These cookies will be stored in your browser only with your consent. You also have the option to opt-out of these cookies. But opting out of some of these cookies may have an effect on your browsing experience.
Necessary Always Enabled
Necessary cookies are absolutely essential for the website to function properly. This category only includes cookies that ensures basic functionalities and security features of the website. These cookies do not store any personal information.
Non-necessary
Any cookies that may not be particularly necessary for the website to function and is used specifically to collect user personal data via analytics, ads, other embedded contents are termed as non-necessary cookies. It is mandatory to procure user consent prior to running these cookies on your website.
SAVE & ACCEPT
148 shares