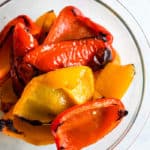 A kitchen skill that everyone needs to know: how to roast bell peppers! The most efficient way to do it, in my opinion, is in your oven. Roast a bunch of bell peppers at once, and use them in meals throughout the week.

Look, I'm not going to lie, I take shortcuts in life. I buy jarred roasted red peppers all. the. time. Why? Because they're convenient, delicious enough, and it's winter for six months in Wisconsin so good luck finding one red pepper that holds a candle to local, seasonal, truly fresh red pepper. But, since it is summer, and bell peppers are in season, I decided that I would take the time to roast them. And so, here we are.

The Best Method for Roasting Peppers: The Oven

Obviously the fastest method, right? Always (at least in my humble opinion).

I mean, holding each pepper individually over an open flame until it's roasted to a perfect char is totally acceptable... if I'm one eating them. But if I'm the one roasting them? Nope. It's all at the same time, all in one oven. One and done. Which, lucky for us, gets us those deliciously charred, olive oily results just as well.

To prep, you'll just need to preheat your oven to 450 degrees -- 500 if you can! It's gotta be HOT. -- and get out a rimmed baking sheet. For ingredients, it's simple: just some red, yellow, and/or orange bell peppers, olive oil, and salt.

You'll start off by deseeding the peppers and cutting each one into quarters, lengthwise, and place them in a bowl, like so:

You can use as many peppers you want. I usually do anywhere from 8-10, because hey, if I'm taking the time to make these, I want to eat them with everything throughout the week.

Next, toss them in a generous amount of olive oil (I use about ¼ cup for 8-10 peppers -- you want them to be well-coated) with a healthy pinch of salt. From there, empty the bowl with all the olive oil and peppers onto your prepared baking sheet, spreading them evenly across.

Then, just pop those babies in the oven for at least 30 minutes (depending on your oven, it could be more like 35-40), until they start to collapse and each one has those nice, charred edges. You can flip them halfway through if you'd like, but it's not necessary.

And then? Put them in meals all week long!

How to Use Roasted Bell Peppers

Will I always roast bell peppers myself and never buy jarred roasted peppers again? Probably not -- I'll always be an occasional shortcut-taker and I won't judge if you are, too. But if you adore roasted bell peppers, and if you also live in a place where you have a fleeting season of fresh peppers... you should roast those babies like there's no tomorrow. Except there is a tomorrow, and in it, your very happy self is eating all the roasted peppers. 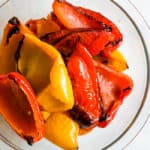 Roasting bell peppers is one of the easiest ways to add flavor to any dish! You can make sauces and spreads, add them to pasta salads and sandwiches, top pizza, or put them out as an appetizer.

*Roasted bell peppers are delicious in warm or chilled dishes alike! I love serving them chilled as part of a Mediterranean-style appetizer plate with olives, cheeses, sourdough, almonds, etc.

*Fresh roasted bell peppers will keep for a week in the fridge. For longer-lasting results, you could follow a canning & preserving method.

More recipes you may enjoy

This website uses cookies to improve your experience while you navigate through the website. Out of these cookies, the cookies that are categorized as necessary are stored on your browser as they are essential for the working of basic functionalities of the website. We also use third-party cookies that help us analyze and understand how you use this website. These cookies will be stored in your browser only with your consent. You also have the option to opt-out of these cookies. But opting out of some of these cookies may have an effect on your browsing experience.
Necessary Always Enabled
Necessary cookies are absolutely essential for the website to function properly. This category only includes cookies that ensures basic functionalities and security features of the website. These cookies do not store any personal information.
Non-necessary
Any cookies that may not be particularly necessary for the website to function and is used specifically to collect user personal data via analytics, ads, other embedded contents are termed as non-necessary cookies. It is mandatory to procure user consent prior to running these cookies on your website.
SAVE & ACCEPT
23 shares